The eighth month of studying abroad is coming soon. I cannot believe that I have stayed in NZ for more than seven months. The cold is starting to let up yet, it still has been a bit cold. I feel like this school term has just started, however, half of the term has already finished. To tell the truth, I was not homesick but I just missed my family and Japanese friends about five months ago and I was counting how many days I have to stay in NZ. Nowadays, I look at the calendar and perceive that I have three months and few weeks at most. I feel like I have to make most of my time. I even feel sad to leave NZ.

In the third week of term three, there was an international assembly. Students who are from various countries or are studying other languages performed dances, speeches, and so on in the assembly. Since we have no assembly like this in Japan, it was so interesting for me. I performed a Japanese pop dance with the other international students. Although I am not good at dancing and I rarely perform dances in front of numerous people. I could dance well without nervousness and it was success. I attribute the success to my friends who taught me the dance and supported me. I had a joyful time with my great international friends.

In the formal, we had a high-class dinner and talked a lot. I do not have opportunities to have high-class dinners so much so I was so excited. After dinner, we had a dance time. Most students were in the zone and dancing freely. I did not get used to that situation and I was overwhelmed at first. However, I was getting so fun and I was dancing happily at last. I had a precious opportunity. I was not used to that situation so I was overwhelmed at first. However, it became fun and I danced happily. It was a great opportunity.

I had ten days off on the last week of August. Most students have practice exams, however, I did not have them so I had special holidays. I thought I would have nothing to do during the holiday but my teachers organized some activities for the students who did not have the practice exams. We had activities on Tuesday, Thursday, and Friday. On Tuesday, we went to Willowbank which was a zoo. I had been there before and I had thought that was just a zoo but we are able to watch not only animals but also a Maori performance. Since I did not watch the Maori performance last time when I went there, I was so happy. The performance was so powerful and interesting.

▽The dinner at the school formal. 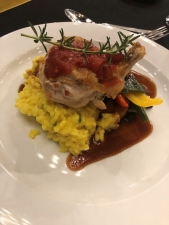