It has been six months since I came to New Zealand. I am really surprised how fast time passed and worried about my English.
Term 2 was over and my friends went back to their home countries. One of them is from Netherlands and the other is from Germany.They spoke English very fluently and had been kind to me like their younger sister. So I cried a lot during the last week. However, I was happy to have such nice relationship with them even though we were from different countries and spoke different languages.

I changed one of the subjects which I took and I got some nice friends.They helped me all the time when I was in a trouble because I did not know anything about this class. One of the friends who was in the same class before I changed the subject told me that what we were doing was hard and confusing even for her, so I was doing well.

I have two months left to go back to Japan. Some friends told me my English has improved, but I do not think my English is good because it sounds still Japanese. I have many chances to speak English, so I will try not to miss these chances and improve my English. 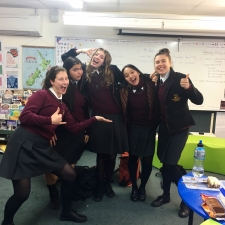