It has been six months since I came to NZ. It is really cold in the morning so I feel like I don’t want to get out of my bed. I felt like I didn’t want to go to school for two weeks of first term however thanks to my friends, I got to love going to school even if I have to get up in the cold morning.

In the beginning of June, there was an open night in my school. Open night is like Japanese open school. The differences are that it is held after school and most students help at the event. I helped the Japanese class by making Japanese name tags. Visitors were surprised and impressed to see the name tags so I was so happy. We ate free pizza before the open night. In Japanese schools, we can never get pizza so I felt very special. I could contribute to the class and I had a good time with my friends. It became one of my good memories.

I made cupcakes the other day in food class. I am in a group with my two friends, Zoe and Victoria. They are so kind, funny, and nice so I enjoyed making cup cakes with them. People don’t make icing for cupcakes so much in Japan. Unlike Japan, it’s common for New Zealanders to make icing. I made icing for the first time in my life and I could do icing better than I thought. NZ cup cakes are much sweeter than Japanese ones but I love them. I couldn’t eat very sweet things before coming to NZ however, now I can eat very sweet things. There are many sweet things in NZ so I might get used to very sweet things.

We had a day when school finished earlier than usual because of a teachers’ conference. My friends took me to New Brighton pier on that day because I had never been there. We ate lunch at Subway and walked on the pier. The pier is longer and bigger than I thought. There were some people who were surfing so I wondered if they were cold. After we walked on the pier, we took some photos and looked around stores near the pier. I was so happy to go there with my best friends. I really appreciate them.

▽cupcakes which I made with my friends in home economics class 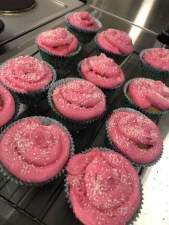 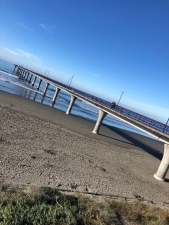