At the end of last term, I did tea ceremony at school. I wore Japanese traditional costume YUKATA. First, I introduced about tea ceremony history and SEN NO RIKYU. And I served WAGASHI. Everyone were surprised at the taste of WAGASHI. After that, I made ceremonial tea. But, I made tea weaker than usual. They enjoyed different culture. So, I was really happy to do that and I had a good experience to introduce Japanese culture. 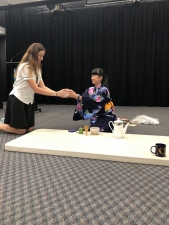 From July1st to 5th I went to Sydney with other Japanese exchange students. Sydney is the biggest city in Australia. First day, we were just went to supermarket and bought some food. After that, we did party at the hotel. The second day, we went to aquarium and Sydney tower. And did lots of shopping. The third day, we went to a zoo and had dinner at Hard Rock Café. It was big a dinner. After dinner, we got Hard Rock T-shirt from AIIU which is Australia exchange company. The fourth day, we went cruising and went to Opera house and Harbor Bridge. The last day, I got up at 3:30am to see off my friend who had to get on the plane earlier than me. It was my first time to go to Sydney. I enjoyed and made good memories with other exchange students. 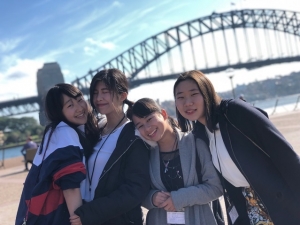 18th July was my birthday. At school my hospitality teacher made a whole cake for me. And I got lots of presents from my teachers and friends. After school I got fever. So, I did my birthday last weekend with host family. I had a great time. 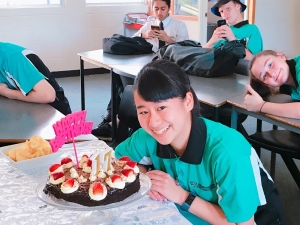